The list of official Arduino boards continues to grow, and, continuing with the famous-Italian-person trend, now includes the Galileo. The Galileo is Intel’s toe-dip into the Arduino waters. It features theirQuark SoC X1000 – a 32-bit, x86 system-on-a-chip that can run at up to 400MHz with 512 kB of built-in SRAM. 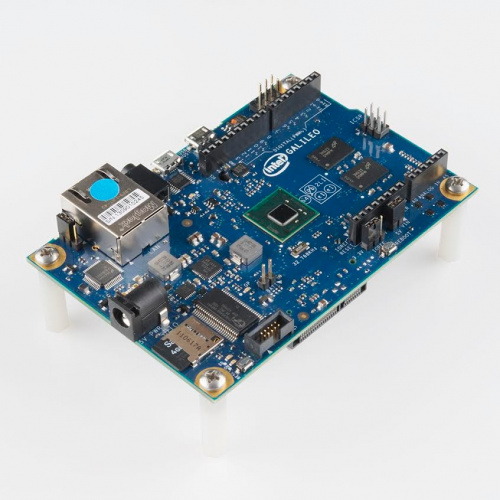 The Galileo board supports the Quark with a wide range of external peripherals. There’s 8MB Flash (to store firmware), 11kB EEPROM, a µSD socket (supports up to 32GB), 10/100Mb Ethernet, USB 2.0 host and device ports, an RS-232 port, and a mini PCI Express (mPCIE) socket. On top of all that, it’s got that same, familiar Arduino pinout we all love (to hate?). The Arduino pins – including six analog inputs, SPI, I2C, UART, and PWM outputs – are all exactly where an Arduino user would expect them to be.

What the Galileo tries to do is meld the ease of Arduino’s hardware manipulation with the power of a Linux operating system. Most sketches written for Arduino Unos, Leonardos, and other boards can be ported directly over to the Galileo. You can still use popular Arduino libraries like SD, Ethernet, WiFi, EEPROM, SPI, and Wire, but you can also make requests of the Linux kernel with system() calls. This gives your Arduino sketch access to powerful utilities like Python, Node.js, OpenCV, and all sorts of fun Linux-y stuff.

We were fortunate enough to receive a couple of early Galileo boards for evaluation, one of which landed in my hands to futz around with. To get a feel for the board, I tried to whip together a quick project that melded a few of the Galileo’s unique features together.

Most of our work communication occurs in emails, but I’m often turned away from my computer, wielding a soldering wand or banging my head against my Pi workstation as those emails pile up. It’s imperative that I stay up-to-date with the latest SparkFun memes and cool robot videos, so a simple unread-email-counter would be great to have permanently installed over my workbench. Sounds like a perfect project for the Galileo!

I loaded that onto a µSD card (also including the Galileo’s SD-bootable “bigger” Linux image, required for Python), and proceeded to the next task.

To display the email count (and retain the Arduino-y-ness of the Galileo) I used an OpenSegment Shield, controlled over SPI. No modifications, just plop it right on top of the Galileo. A lot of the Arduino code below might look familiar, especially if you’ve used the SPI, SD, or WiFi libraries, which all work swimmingly with the Galileo.

One of the key, uniquely-Galilean functions this code incorporates is the system() function, which can issue requests to the Linux kernel. With the below line of code, we can run a Python script from the comfy confines of Arduino:

The output of the script is routed to a file named “emails.” Then we can use the Arduino SD library to read the “emails” file, which simply contains the number of unread emails there are. After a bit of parsing, and SPI-ing, we’ve got an unread email count printed to the OpenSegment Shield! 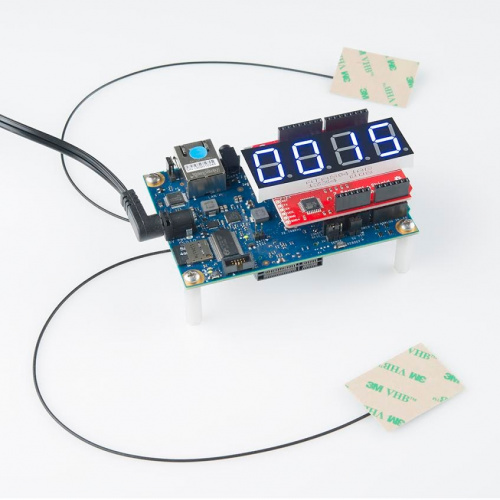 (Now if only I could program it to answer those emails…)

After toying around with the board for a few days, here are a few of my thoughts on the pros and cons of the Galileo:

The Galileo is a unique entry into the growing Arduino board catalog. I’m sure there are plenty of projects out there that can make use of the unique blend of Arduino and Linux. Is the Galileo ever going to unseat the Raspberry Pi? Probably not. But they both serve their own, unique purpose. The Pi, with its HDMI output, gives you a complete, mini-computer, while the Galileo is more of a hardware-focused platform, with a smaller Linux backbone (and Arduino shield compatibility!).

Have you had a chance to play with the Galileo yet? What are your thoughts? Looking to pick one up? It looks like availability is beginning to increase; I hope to see the Galileo community continue to grow, and seed more projects that can make use of the board.